Plato’s Cave and the Story of Your Life

Do you enjoy good stories in which you also discover a part of yourself?

The following Allegory of the Cave written more than 2000 years ago by the Greek philosopher Plato in the year 400 BC is one of the most important wisdom tales of mankind. No one has since been able to describe better what you will also experience as soon as you start asking questions and discovering secrets about life and mankind.

We have translated the story into modern day language, while the content and message remain unchanged.

Leaving The Cave Of Unconsciousness

(The »Allegory Of The Cave«)

Imagine an underground cave with a head-high wall in the middle. A group of prisoners are chained to this wall, facing the back wall of the cave. Their hands, feet and necks are shackled so that they can only look in one direction. Imagine that all these prisoners can see in front of them is the opposite wall of the cave. As their neck is hold in place, they don’t see anything else but this wall. And as their bodies are shackled too, they are unable to get up and explore the cave.

Now, moving shadows from humans, animals, plants and clouds are projected on this wall in the cave that all the prisoners look at. Imagine that the prisoners have been sitting in this cave all of their lives and that they have never seen anything else but the wall and the shadows. Thus, the shadows represent the world known to them – their reality. The prisoners would talk about the shadows, wondering about the behaviour of some shadows, they would monitor them closely and exchange their discoveries and assumptions. And maybe there would be one or more shadow scientists among them.

Now, imagine that one of the prisoners somehow breaks free of those chains. He gets up and looks around. As he explores the cave, he discovers the cave exit behind him above the wall all the prisoners are chained to. From there, daylight falls down on the cave wall. Whenever humans or animals pass by the exit above, they cast their shadow on the wall down in the cave.

The prisoners know nothing about this. For them, the world consists of dark, two-dimensional figures.

The freed prisoner, however, can see with his own eyes how the shadows are created and that they are not the truth about life and the world out there. Instead, they are just a weak reflection. Of course, the freed person tells his fellow cave-dwellers about his discovery. He walks excitedly in front of the others, telling them that everything they have considered to be true all of their lives is not reality, only a shadow play. He speaks about how the illusions arise, how one can recognize the truth and how much more interesting it is. He keeps asking the others to get up and get interested, but they simply cannot as their own chains hold them captive.

3  The World Of The Cave Dwellers

How would the other prisoners react to what the freed person is saying, if they were still chained in the cave? Probably, they would deem most of his statements to be insane. What if the freed prisoner would still tell about his discoveries? First, they would ignore him. Then, they would tell him to stop saying such things. Then they would call him crazy and make a fool of him. Then they would try to silence him. If this didn’t help, they would probably reject him openly, excluding him from the community and perhaps eventually even fight him. They would punish one of their own because he speaks about a new truth. Although the freed prisoner did nothing more than to report what he has discovered and realized. 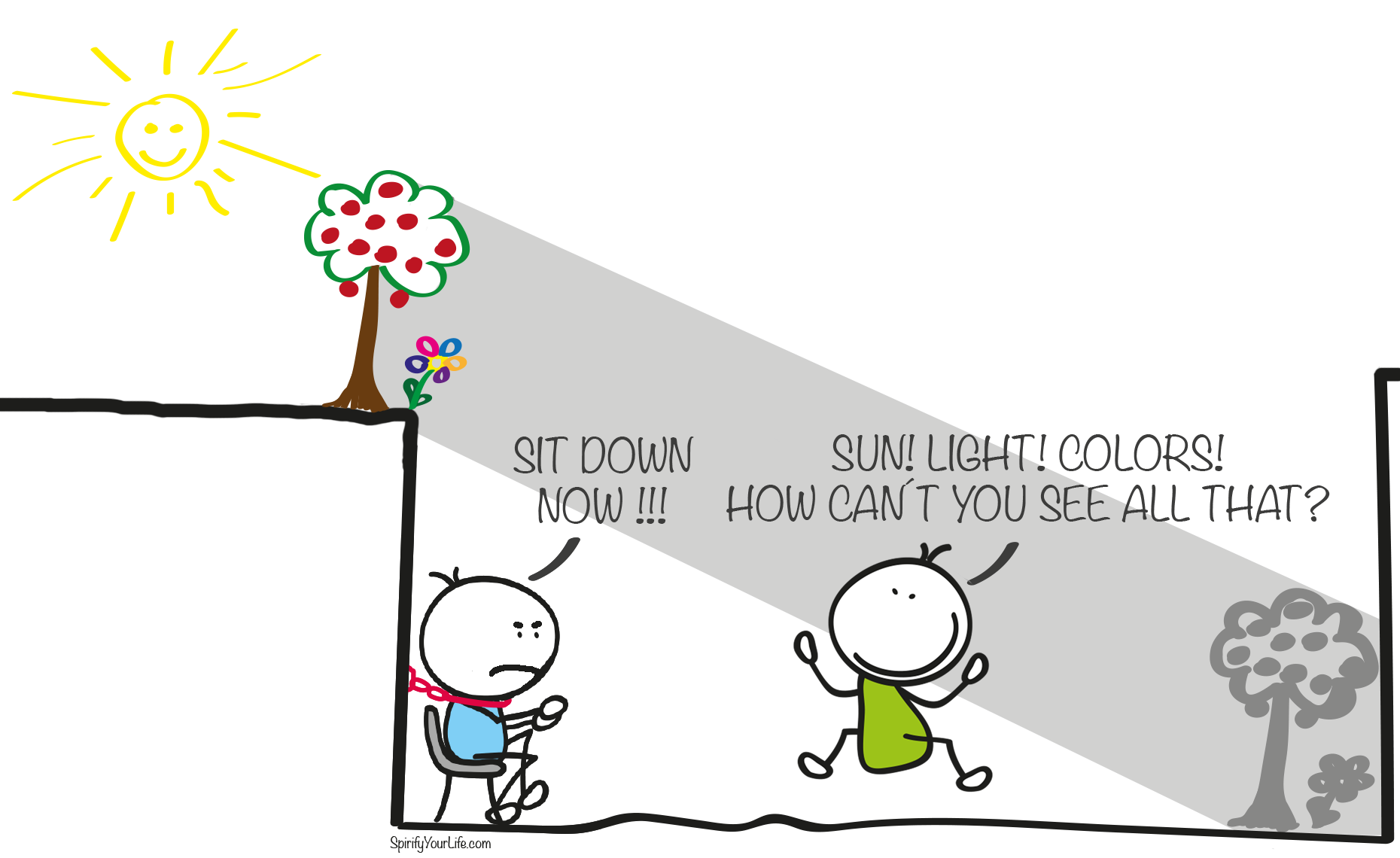 4  The World Of The Freed Prisoner

What will the freed prisoner experience after his discovery? In the beginning, he would be confused to realize that nothing is what he believed it to be. Perhaps he would return to his old place in front of the shadow wall, hoping that everything would be back to the way it used to be. But a part of him simply cannot forget what he has seen. The freed prisoner might be a bit frightened as his new knowledge now separates him from the world of his former inmates. Very carefully he tries to explain his discoveries in order to enhance his inmates’ understanding. He speaks not only about how the shadows are created but also, with the best of intentions, about the limited perspective of the shackled inmates he used to be a part of.

However, the more he struggles for interest, understanding or enthusiasm on the part of the other inmates, the more he is met with refusal, eventually leading to an open conflict and even attacks. Although the freed prisoner attempts to speak about the positive effect of his discovery, he is accused of attacking them. After a while, the cave-dwellers feel attacked only by his presence. 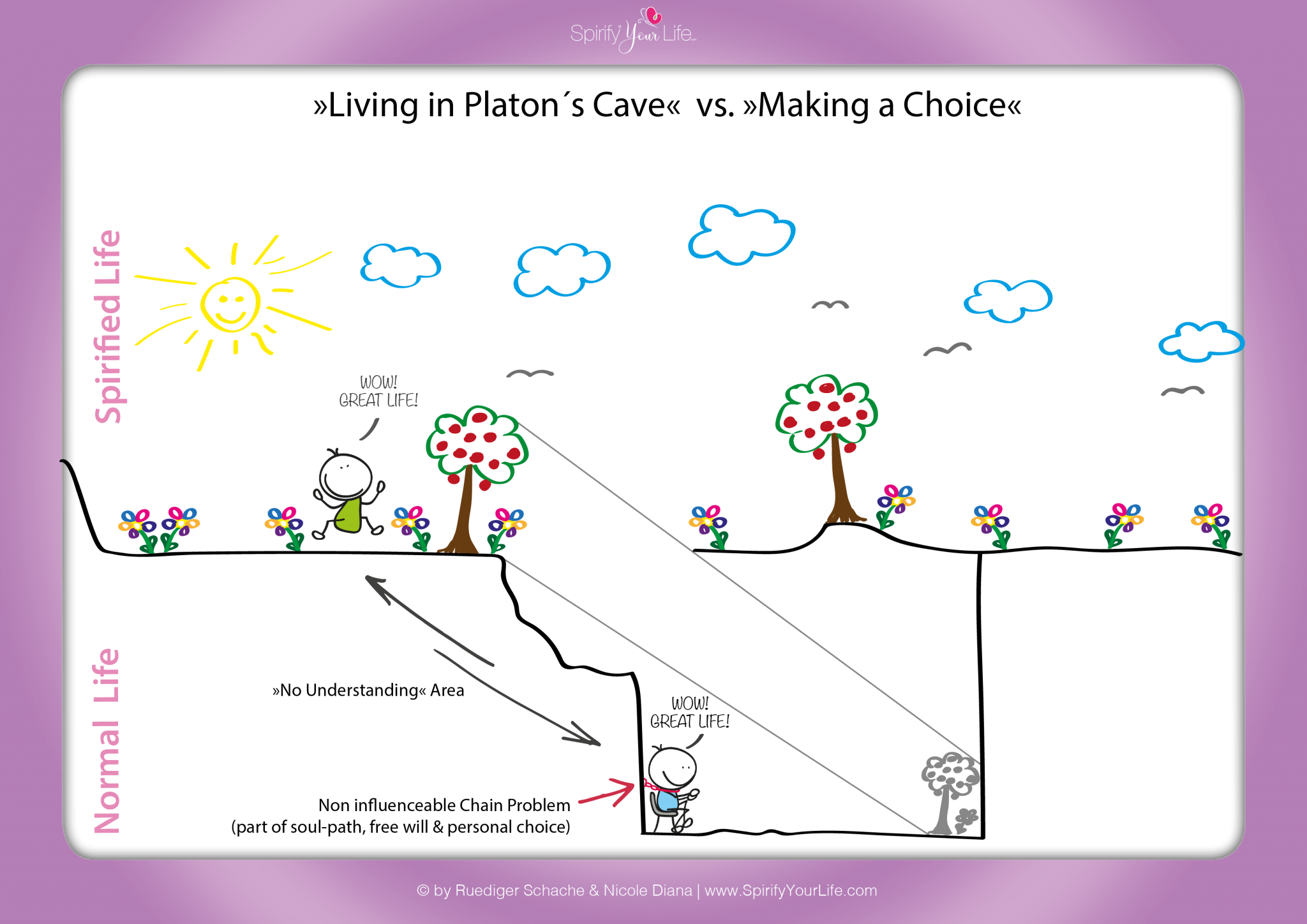 Eventually, the freed prisoner recognizes that he needs to take a decision he absolutely wanted to avoid: Either to return to his place in front of the wall and keep watching the shadows to discuss them with the others as they used to do. Or to continue on his new path outside the cave. However, although he is yearning for the familiar community in the cave, it is no longer possible for him to return, as he would permanently need to hide his feelings and thus hurt himself all the time.

Will he follow the new path towards the truth he has recognized on his own, or will he tacitly accept the perception of the world of his former inmates? One sorrow is in opposition to the other.

The freed prisoner decides to follow his desire and sets off for the cave exit. He searches for the source of light. Although the discovery that there is a bigger, lighter and more diverse world out there has a magnetic effect on him, this path towards the unknown also frightens him a little. When he finally reaches the cave exit, he is blinded so much by daylight that it hurts. Where everything used to be dark and grey, now the colours and shapes of the world appear like an explosion of the senses in his head. Also, the noises appear a lot louder and sharper, coming from all directions instead of just being reflected by the cave wall.

The world beyond the shadows is incredibly fantastic and perplexing at the same time. For the freed prisoner, it seems as if life would reveal his own origin all over again, just with detailed explanations and pictures, painted with light, colours and space. Knowing that he knows nothing, but that there is a lot to explore, he takes his first steps. Now, every move is worthwhile, as every new discovery makes him happy. And these constantly new things will never leave him again.

How was your story of leaving the cave like?

Maybe you have experienced this situation being faced with the decision when gaining new knowledge. Despite a common past and long-standing familiarity, you have grown and changed. You can definitely no longer be the person you used to be. But as this is precisely what you are accused of, the situation gets more and more difficult for you, although the only thing you do is to strive for knowledge and truth.

The following facts can give you clarity, strength and confidence:

Therefore, we have added a feature to the SpirifyApp you can use to contact other users.